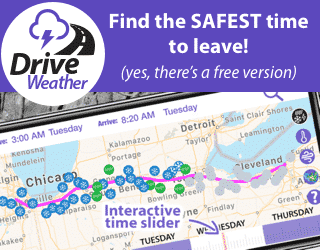 This map shows I-70 weather conditions and radar forecast for the next 6 hours.

Interstate 70 is an east/west highway that cuts across the center of the country for 2,151 miles. I-70 connects Baltimore, Maryland and Fort Cove, Utah while passing through several major cities, including Pittsburgh, Columbus, Indianapolis, St. Louis, Kansas City, Topeka, and Denver.

Get 7 days of weather, Compare Routes, and many more features.

Start at your Location

The sections between Missouri and Kansas are claimed to be the first interstate in the U.S. Oddly, the Federal Highway Administration has claimed that the section that passes through Glenwood Canyon, Colorado was the last section of the interstate highway system to open to the public in 1992. This part of the highway is also recognized as the highest point in the interstate highway system. As it passes through the Eisenhower Tunnel it reaches as elevation of 11,158ft.

Scroll to top
We use cookies on our website to give you the most relevant experience by remembering your preferences and repeat visits. By clicking “Accept All”, you consent to the use of ALL the cookies. However, you may visit "Cookie Settings" to provide a controlled consent.
Cookie SettingsAccept All
Manage consent

Any cookies that may not be particularly necessary for the website to function and is used specifically to collect user personal data via analytics, ads, other embedded contents are termed as non-necessary cookies. It is mandatory to procure user consent prior to running these cookies on your website.